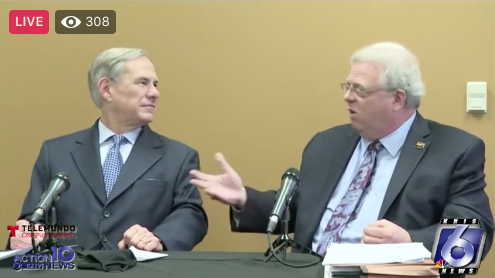 Abbott spoke in Harris County about the legislation in both chambers.

In short, he described measures that would reign in mail-in balloting and curbside voting. The Senate version is known as SB 7.

“What we look for and what we have seen in the past is that we… wait for allegations (of irregularities) to be made. They are submitted to the Secretary of State’s office. What we have found in the past is that some election results have been altered. We don’t know where (results have been altered at this time) but ANY voter fraud that takes place sews seeds of mistrust in the election process. We must remove that mistrust. Every eligible voter will be able to cast a vote, but no one will be able to cast an illegal vote,” said Abbott.

The Governor was referencing reports from Harris County that curbside voting was mishandled and really turned into a drive-thru voting scenario that was illegal. Jefferson County also had some drive-thru voting that might be deemed improper by state regulations.

“The [Harris County] Elections Clerk attempted to send unsolicited mail-in ballot applications to MILLIONS of voters, many of whom would not be eligible to vote by mail,” Abbott said.

Abbott was flanked by State Sen. Paul Bettencourt, R-Houston, and State Rep. Briscoe Cain and said there had been “rampant attempts to expand voting,” in the 2020 elections.

Sen. Bettencourt asked for legislation that would establish a “very important” verifiable paper trail and ensure poll watchers are available in all voting locations.

This past weekend Abbott told Fox News anchor that Democrats are trying to “protect ballot harvesting” and cited a case that appears to reference a controversial 2014 instance in Donna, Texas.

The Governor seems to be referring to allegations that a Donna school board candidate offered cocaine for votes in the 2014 election.

In advance of the press conference at Sen. Bettencourt’s offices, protestors gathered outside to argue the SB7 in question amounts to “voter suppression.”

As one protestor put it, the bill, “will not only wipe out all of the elections innovations that made Harris County a national leader in voter access but also ensure Texas remains the worst in the nation in voter intimidation and suppression.”