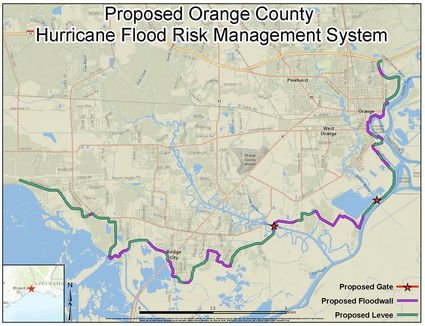 Orange County Commissioners Tuesday approved a resolution supporting the formation of Gulf Coast Protection District, which would oversee the construction of the US Army Corps of Engineers’ federal levee system. The proposed levee system would be 65% funded by the federal government and 35% from non-federal sources.

Right now the cost for Orange County’s portion is at $800 million to $1 billion, per a conversation with Judge John Gothia today.

However, $76 million of that has been covered by the General Land Office, and Gothia says they will continue to work with the legislature during the 2021 session to get more for construction.

The entire levee project would be designed to alleviate coastal flooding from storm surge and inland flooding and would stretch from Orange County to Brazoria County along the Gulf Coast.

General discussions about needing such a system have taken place in Orange over the years, even at one point calling the project the “Ike Dike”, after Hurricane Ike in 2008.

This project would consist of building, (from scratch in the case of Orange County), a system of levees, floodwalls, gates, and pump stations.