1813 has learned some Southeast Texas employers are against the wall with a raft of questionable, frustrating, and even potentially illegal actions by employees.

We will focus on just one Southeast Texas bedding company. In the admirable race to protect the jobless, the Texas Workforce Commission is failing in its responsible of verifying the cause of job seperation and ripping off employers. The “cause” of joblessness was listed by the employee as “disaster” or, in other words, the COVID19 crisis. Thing is, the employee left of her own accord. Basically before the onset of the crisis and for reasons unrelated to COVID at all.

TWC didn’t verify the claims. Three days after the employer got notice that a claim had been filed and before the company could even respond, TWC notified the employer that the case had already been closed. The full-time employee had been given a $1200 stimulus check. And vanished right after her exit interview.

You can see the documents below. The employer wasn’t allowed to fight the claim because the matter had been settled before the company could even respond by May 8th. Unemployment benefits are typically NOT awarded to employees who quit on their own. But TWC has apparently decided to move FAST instead of moving fast while being thorough.

So the employer said enough is enough and attempted to call the hotline designed to give Texas companies a remedy from fraudsters. The hotline was busy for HOURS according to the “boss.”

It is a felony to falsify unemployment requests, but the state is doing nothing to protect the employers it seems. 1813 has learned several other employers have been struggling to get workers to return. The unemployment benefits are just too alluring.

We expect developments in this story. Give us your views. 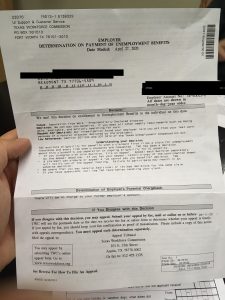 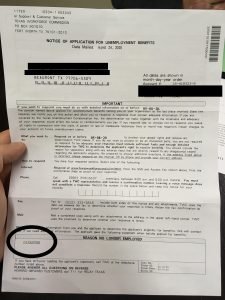