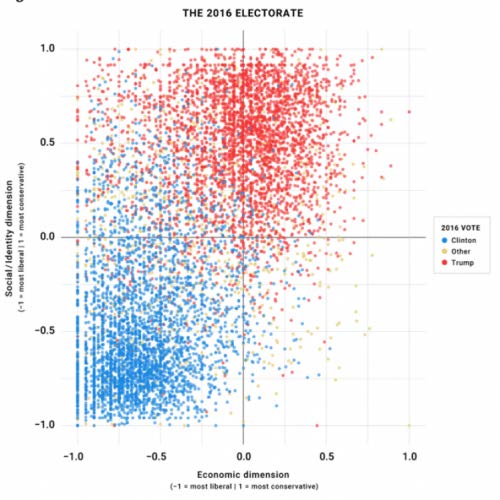 President George H. W. Bush was known for both “read my lips, no new taxes” as well as his call for a “kinder, gentler nation” in his 1988 acceptance speech. The former lead to his defeat to Clinton, and the latter to his election as President. Republicans need to remember this lesson now that we are again the minority party at all levels of the federal government. The midterm elections usually don’t favor the President’s party, and presenting alternative, reasoned proposals to the democrat’s goals will go a long way towards flipping the House and Senate back to Republican control.

Looking at the 2016 coalition that brought Trump to power gives the clearest path forward to recapturing the House and Senate. In 2016 it was a combination of traditional conservatives along with individuals who were socially conservative but fiscally moderate that voted for Trump.

That coalition is easy to recreate but will require an alternative economic message to create the wedge in the DemocraAc Party voting bloc.

In order to understand how an alternative economic message can be formulated, we have to first understand the dollar is an unusual currency.

Not ALL traditional economic theories will apply. Secondly, the mechanics of how the Federal Reserve actually adds and removes money from the economy are important.

The dollar is unusual in that it is not tied to another currency or precious metal for valuation. In a traditional economic system, the currency is tied to either another country’s currency or to gold for valuation. However, the dollar has no such linkage. This means that in order for taxation to occur, the Federal Reserve has to release money into the economy, and then the money is circulated and taxed on
the back end.

The Federal Reserve has two main tools to address the economy. One is interest rate adjustments and the other is quantitive easing or tightening.

Banks are required to have adequate assets on hand to make sure another economic meltdown does not occur. The Federal Reserve adds and removes money from banks via quantitative easing and tightening.

Republicans have two easy arguments to make to counter popular Democratic talking points that would create a wedge in the voting bloc when the democrats reject the compromise. The first is a counteroffer on minimum wage, and the second is an alternative to the democratic party argument for a universal minimum income.

Making an offer that is reasonable, but the Democrats cannot accept because it takes
the issue away is one of the easiest ways to recreate the 2016 coalition that brought Trump to power.

In refusing the compromise the Democratic Party alienates moderates and makes them more likely to vote for Republican candidates in 2022. If the compromise is accepted then we see a minimum wage increase in line with past increases. Either way, the Republicans win because it is the Republican plan that has prevailed, and the socially conservative fiscally moderate voter moves back into the big tent.

Proposing a counteroffer to the Democrat’s cry for a basic monthly income also helps create a wedge in the Democratic voting bloc and diffuses an issue that drives progressives to the polls. While Republicans may not like the policy decision of a $3,600 (or $3,000 depending on age) child credit for income taxation the policy decision has already occurred.

Republicans benefit by making a policy proposal that accepts the current reality and uses the credit in a more economically efficient manner. Obamacare has established that the IRS is capable of administering a tax credit on a monthly basis. The three stimulus distributions have established the IRS is capable of handling direct deposits into an individual’s bank
accounts.

Allowing individuals to take 1/12th of the child tax credit as a monthly credit injects the money into the economy faster and allows it to circulate and generate tax income quicker than simply holding it as a credit for tax Ame. A monthly $300 distribution is small enough that it is likely to be spent rather than saved and create the actual economic activity desired. The monthly $300 distribution is also large enough that it ensures a family of three will not starve. Again, this is a situation that the Democrats will not accept, but it also is something that will create pressure on the moderate voter to vote Republican rather than Democrat.

Making these two proposals places enormous pressure on the Democrat party going forward. This shows that Republicans are actively trying to compromise and govern rather than simply resist and point out where the Democrats policies fail. By presenting an alternative plan and being rejected the Republicans make a strong argument that they should be given the opportunity to control the legislative branches of government and eliminates the potential for the Biden Administration to do lasting harm to the economy.